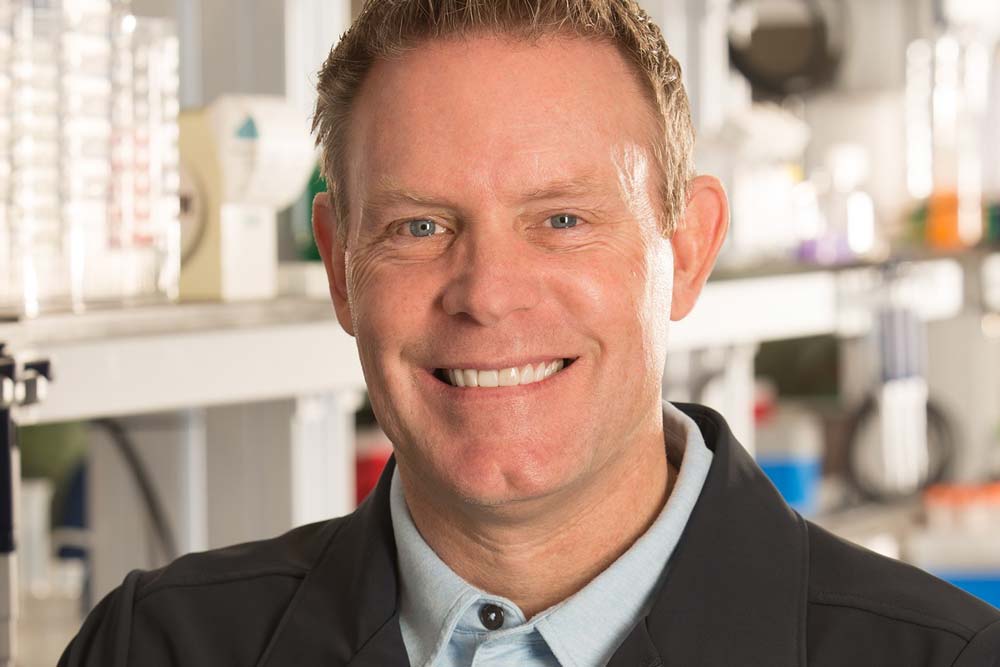 Unchained Labs founder, Tim Harkness, in one of the company’s labs.

It took Tim Harkness just one bike ride on Pleasanton Ridge to figure out what his next life science company would be.

He’d sold his second successful company, Protein Simple, the day before and figured out the core approach to Unchained Labs while riding the next day. That was in 2014 and he and colleagues formally launched Unchained February 12, 2015, with its first acquisition and $25 million in venture funding.

Unchained is a pure play building tools for biologics researchers. Biologics are large, complicated molecules that are the building blocks of effective drugs.

“I’ve been working with proteins for a long time I thought that there was a real opportunity for people to have tools that were specifically focused on understanding biologics,” Harkness said. He pointed out that almost all of the injectable drugs that are advertised on television are biologics that cannot be packaged into a pill. 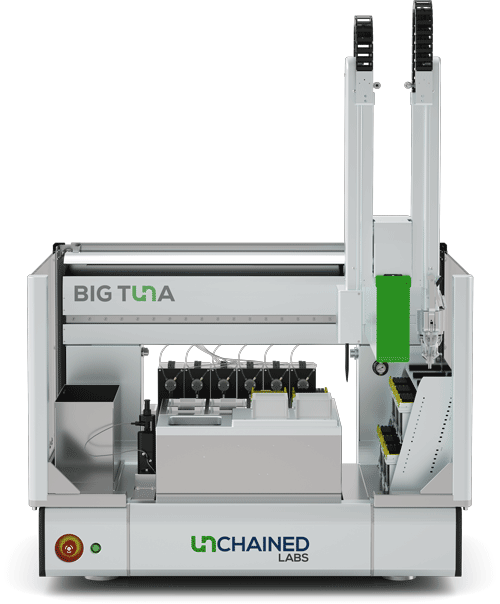 “They are tremendously effective, expensive and kind of finicky. That’s the class of drugs that this company was founded to help researchers understand and study, develop and produce,” he said.

It’s now approaching its 5th birthday and hit $50 million in sales in 2019. About 95 percent of its sales are to commercial pharma and biotech companies.

Harkness and his experienced executive team have built the company with a different approach. They locate companies with products that have proven themselves in the marketplace, but lack the resources and capability to scale in the marketplace. They acquire the company and its technology, work at a quick pace to improve and enhance it and then take it to market.

The acquisition strategy was a key part of the pitch to venture capitalists. “We can deliver venture returns without venture risk because we slice off the early piece of product development.”

“What we do is find things that are under-appreciated, but already commercially viable—somebody has sold the product. The product is not fully evolved, but the fundamental underlying technology is sound,” Harkness said.

Once they purchase the firm Unchained improves it on an aggressive time window—three to six to 12 months. And, he emphasized, deadlines, once agreed upon, are met.

How the teams achieve the product goal is up to them as are decisions about what can be included in the new machine. Harkness said that the short deadlines focus the thinking on what’s important and makes everything else extraneous.

Their first product, UNit was released less than three months after the company launched. There were four acquisitions within the first 12 months of operation.

The plan moving forward is for an average of one acquisition and two product releases each year and organic growth of 15 percent annually. The company already is cash flow positive, but Harkness is focused on growing the top revenue line. The firm has exceeded the 15 percent goal in each of its first five years. Its growth has been supported by $86 million in venture capital. Harkness indicated that they may go for another round of funding if it is necessary to make additional acquisitions, but it wasn’t currently planned. 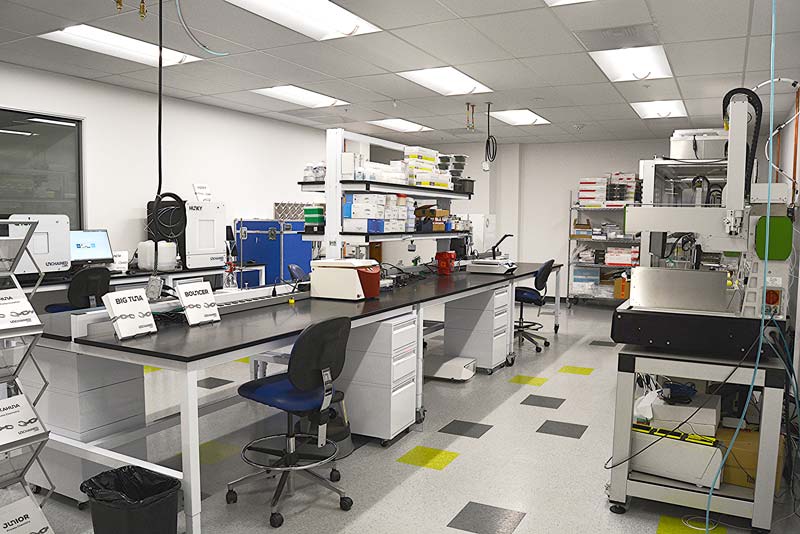 Unchained operates with an unusual and fun approach.  A press release described a new product demonstrates this: “UNcle is a mash-up of 2 key Unchained Labs tools, joining the UNit’s multiplexed stability measurements with the pUNk’s sensitive DLS detection. Scientists are now able to get all the size, aggregation, thermal ramp, isothermal and viscosity information they need with one platform, and use way less protein in the process.”

Harkness noted that products like UNcle that married two acquired technologies and then took it to the next level of capabilities are among the fastest-growing products for the company. It’s the key product in their current line.

Unchained has launched nine products in five years, not including its custom-designed workflow automation stations that are $1 million or more.

Unchained teams continue to evolve and improve products. He cited UNcle that has had 6 or 7 additional capabilities added to it, so the market has broadened even though the name and the packaging have not changed.

The company culture and branding shouts that it’s different. Every product contains “UN” in its name, as do the conference rooms. The executive pictures on the website are the anti-thesis of buttoned-up and buttoned-down. And the website and corporate communications are written in a breezy style that again is opposite of what you’d expect from a manufacturer of seriously capable tools for big pharma and biotech firms.

“When you are small, in the big scheme of the world, you need to have a voice that is disproportionately big. The way you do that is to have a brand that connects emotionally with people. It’s my hope that when someone looks at our products and see it they will have an emotional reaction,” Harkness explained.

When it comes to the people, there are no requirements that teams work in the corporate headquarters. Harkness doesn’t care where they work or when they work—just meet the deadline.

The jobs portion of the website reads, “Unchained people get amazing amounts of work done, focus on what matters and never give up. They thrive on mind-blowing results and make decisions with incomplete information on a daily basis. They’re team players that always know it’s all about we, not I. 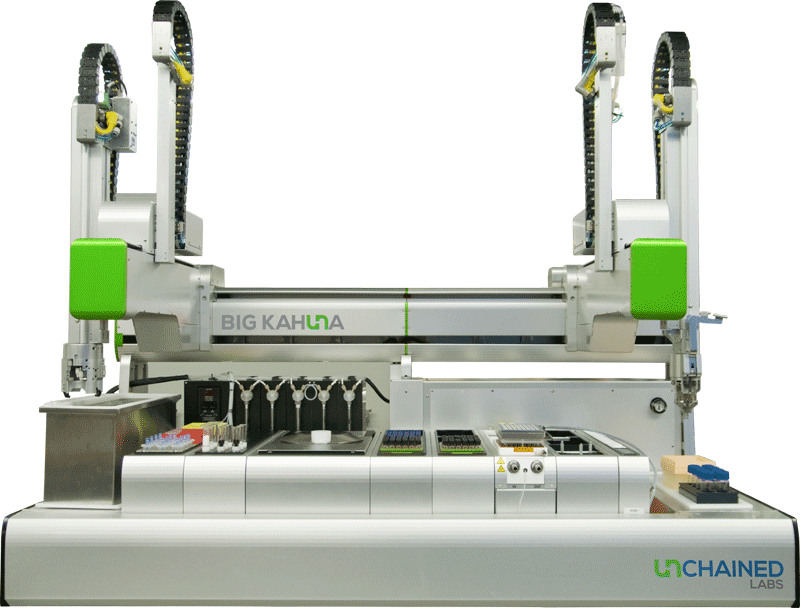 We move fast and expect a lot. So if you’re not down with the unknown, making mistakes and feeling accountable, stop reading. But if a fast pace, autonomy, flexibility and real responsibility float your boat, just hit the button and send your resume on in.”

Harkness said, “The business is all about the people and people are everything. If you get can the right people, magic can happen. We run a results-only work environment. What that means if we hire professionals, we trust and believe in them. We set clear, simple goals and give them complete autonomy in the way they approach and achieve those goals.”

He cited the book “Drive” by Daniel Pink that he read 10 years ago as helping shape his thinking in this area.

The company employed 165 people in December with about half working in manufacturing. They expect to add 15-20 people this year to support the anticipated 15 percent growth. In addition to the headquarters in Pleasanton, it has offices in Boston, Belgium (also manufacturing), Shanghai and Tokyo. The Belgium site came through an acquisition.

What were/are the key factors in your choice of locating in the Tri-Valley? What competitive advantages does it give you?

I decided to start Unchained Labs in Pleasanton because I live in Pleasanton. While I didn’t realize it at the time the key competitive advantage of building a business in the Tri-Valley is access to talent. Hiring in the Tri-Valley is easier than in the valley for all the reasons that we all live here – lower cost of living, great schools, real communities and a reverse commute from almost anywhere.  This is a great place to raise a family and that makes it a great place to build a business.

What are the biggest lessons you learned building your company?

Unchained is the third company I have built and I am always amazed by how much I still have left to learn.  The world is constantly changing and you have to be forever curious and evolving to build a successful life science company. The biggest lesson is that you can never stand still or get comfortable.

What is your “Secret Sauce?” i.e. what are the 3-5 Leadership Principles that you have discovered and executed that have contributed to your success

Last Book Read: "A Crack in Creation" by Jennifer Doudna 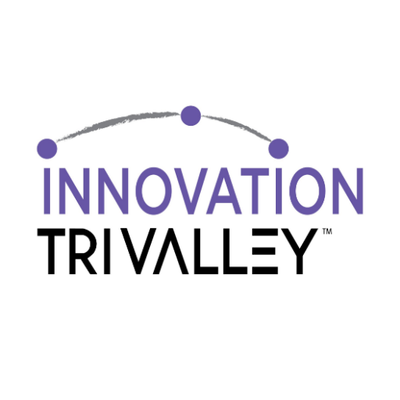 Innovation Tri-Valley Leadership Group (ITV) is led by business leaders and influencers committed to connecting the businesses, research labs, educational institutions, and civic leaders in the Tri-Valley region. This collaborative force is generating job growth and economic vitality for a region that is globally connected, regionally united, and locally unique. https://innovationtrivalley.org/
← Accelerated Growth in Life Sciences #TRIVALLEYtogether Calls Regional Community into Action →
We use cookies to ensure that we give you the best experience on our website. If you continue to use this site we will assume that you are happy with it.OkPrivacy policy